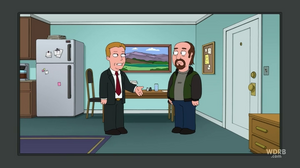 Christopher Edward "Chris" Hansen (born March 26, 1959) is an American television journalist. He is known for his work on Dateline, in particular the former segment "To Catch a Predator", which revolved around catching potential Internet sex predators using a sting operation.

In "Valentine's Day in Quahog", Herbert tunes in to his favorite show "To Catch a Predator Who's Proud of Being a Predator" hosted by Chris Hansen. When he confronts a predator for traveling hundreds of miles to meet a 13 year old, he is disappointing that he isn't meeting with a 14 year old.

Retrieved from "https://familyguy.fandom.com/wiki/Chris_Hansen?oldid=179246"
Community content is available under CC-BY-SA unless otherwise noted.