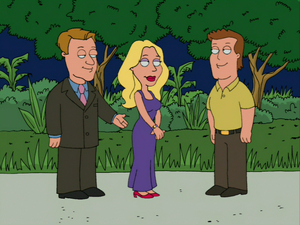 Christopher Bradford "Chris" Harrison (born July 26, 1971 in Dallas, Texas) is an American television host, perhaps best known for his role as host of the ABC reality television dating show, The Bachelor, since 2002 and its spin-off, The Bachelorette, since 2003.

He appeared in "Brian the Bachelor" hosting The Bachelorette.

Retrieved from "https://familyguy.fandom.com/wiki/Chris_Harrison?oldid=121678"
Community content is available under CC-BY-SA unless otherwise noted.