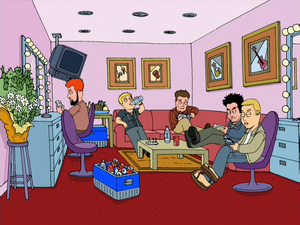 Christopher Alan "Chris" Kirkpatrick (born October 17, 1971) is an American singer, dancer, entertainer, and voice actor who is best known as a founding member of the pop group *NSYNC in which he sang counter tenor. He has provided the voice for many kids shows, including the voice of Chip Skylark on The Fairly Odd Parents.

*NSYNC appears in the "Family Guy Viewer Mail No. 1" segment "SuperGriffins" playing a concert in Quahog.

Retrieved from "https://familyguy.fandom.com/wiki/Chris_Kirkpatrick?oldid=107371"
Community content is available under CC-BY-SA unless otherwise noted.