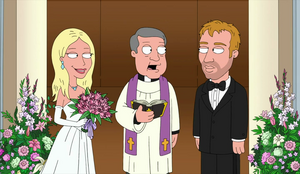 In "Long John Peter", during Busy Business Lady Who's Life Is Missing Something But She Doesn't Realize It Because She's So Busy With Business, the music playing when the business lady and her colleague's eyes meet is Coldplay's song "Clocks".

In "420" while Peter is high on weed, he can not make a cutaway so he show a list of people he hates. "Chris Martin" is shown twice, along with his parents and ancestors.

Coldplay appears in "April in Quahog" when Peter reveals he was kicked out for suggesting they make a song that isn't "whiny bullcrap".

In "Brian Griffin's House of Payne", a poster of Coldplay appears on the set of Class Holes!.

Meg asks her date Toby if he likes Coldplay in "Valentine's Day in Quahog", to which he gives an affirmative by noting that he is a dull, white guy.

In "Road to India", Stewie concedes that Padma and Brian make a cute couple, although he notes that so did Gwyneth Paltrow and Chris Martin, setting up a cutaway in which Martin agrees to be nagged by Paltrow, while being compared to a "watered-down" Bono.

Retrieved from "https://familyguy.fandom.com/wiki/Chris_Martin?oldid=197172"
Community content is available under CC-BY-SA unless otherwise noted.