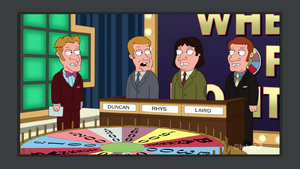 Chris O'Dowd (born 9 October 1979) is an Irish comedian and actor best known for playing Roy Trenneman in British sitcom The IT Crowd. He has also appeared in several Hollywood films, including Gulliver's Travels and Bridesmaids.

Chris voices that the Queen is dead and Rhys on Wheel of Politeness in "Chap of the Manor" in "Family Guy Viewer Mail No. 2".

Retrieved from "https://familyguy.fandom.com/wiki/Chris_O%27Dowd?oldid=128735"
Community content is available under CC-BY-SA unless otherwise noted.