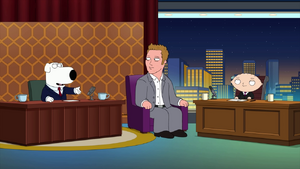 Christopher Michael Pratt (born June 21, 1979) is an American actor, known for his work in the Guardians of the Galaxy series and Avengers: Infinity War tie-ins, Passengers and the Jurassic World series.

Chris is the guest on a confusing two-host talk show hosted by Brian and Stewie in a cutaway gag in "The Unkindest Cut". They pepper him with questions about his career, including working with Amy Poehler, but he is unable to answer before they run out of time.

Retrieved from "https://familyguy.fandom.com/wiki/Chris_Pratt?oldid=205279"
Community content is available under CC-BY-SA unless otherwise noted.