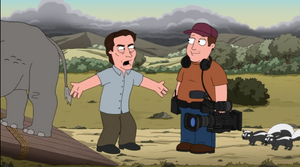 Christian Charles Philip Bale is an English actor,known for his work in the Dark Knight trilogy, American Psycho and The Fighter, for which Bale won an Academy Award for Best Supporting Actor in 2011.

The original broadcast version of "Ocean's Three and a Half" has an audio recording of Bale yelling at Peter Griffin that parodied the viral recording on YouTube of Bale yelling at director of photography Shane Hurlbut while filming on the set of Terminator: Salvation. The recording was taken in February 2009 after Hurlbut supposedly walked into Bale's eyeline during filming of the most emotional scene of the film and is also laden with profanities. The scene was dropped from all rebroadcasts and the DVD, not even included as a deleted scene; it is, however present in the Hulu version.

When Peter/Noah is paring up the animals in "Holly Bibble", Bale is paired up with an 'annoying cameraman.' When the cameraman notes they'll be rooming together, Bale repeats the 'Good for you' line from his rant.

Retrieved from "https://familyguy.fandom.com/wiki/Christian_Bale?oldid=222366"
Community content is available under CC-BY-SA unless otherwise noted.