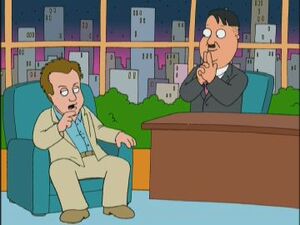 Christian Michael Leonard Slater is an American actor who has starred in films such as Heathers, Kuffs, and True Romance.

In "Death Is a Bitch", Death asks Peter Griffin to imagine if Adolf Hitler was still alive, and it is revealed he'd host a late-night talk show, called Hitler, with Slater as his guest.

Retrieved from "https://familyguy.fandom.com/wiki/Christian_Slater?oldid=121663"
Community content is available under CC-BY-SA unless otherwise noted.