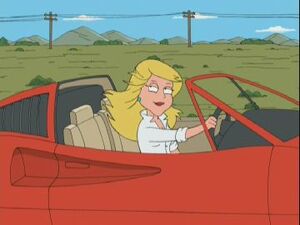 Christie Brinkley is an American model best known for her three appearances on the cover of the Sports Illustrated Swimsuit Issue in the late 1970s and early '80s, for her long-running contract with CoverGirl and for being the ex-wife of musician, Billy Joel.

She appears in "Boys Do Cry", in a parody of a scene involving Clark Griswold, played by Chevy Chase, and a sexy blonde, played by Brinkley in National Lampoon's Vacation. Unlike Vacation, where Clark barely managed to avoid an accident while focusing on the voluptuous passing driver, she is presumably killed in a fiery head-on crash with a semitrailer truck. Lois Griffin notes that when you marry Billy Joel its bound to happen sooner or later.

Retrieved from "https://familyguy.fandom.com/wiki/Christie_Brinkley?oldid=191579"
Community content is available under CC-BY-SA unless otherwise noted.