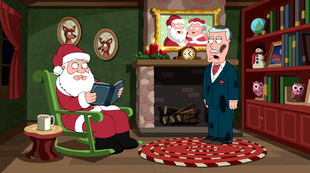 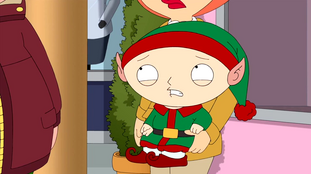 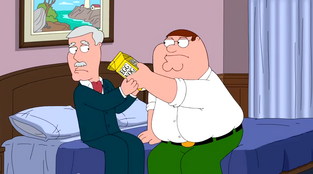 However, the carnival fails to raise Stewie's spirits. When he answers Santa's question of a Christmas request, Stewie realizes he wants Brian back, despite Santa's skepticism. Vinny tries to pretend to be Brian, complete with pretending to be an intellectual and a writer but it fails to win Stewie over, even when giving him his gifts. Trying to raise his spirits, they go to the mall again. Stewie spots himself buying a toy that he purchased just prior to Brian's death and realizes he has to get his hands on the time return pad and enlists Vinny's help. Appealing to Stewie's vanity, Vinny gets him to take off his backpack so Stewie can retrieve the time pad and prepares to save Brian. As Stewie says his goodbyes to Vinny, he admits his actions will result in their never having met as Vinny bids him well.

In the past, Stewie arrives in time to save Brian and he explains what had happened. Stewie sends the time pad back to the present. Having altered the time line, Stewie fades from existence as Brian is grateful for his actions. Back in the present, Brian is alive and well and can't thank Stewie enough for saving him.