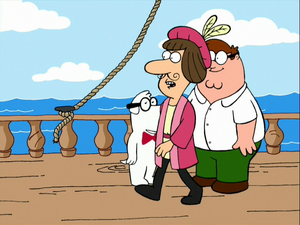 In "The Kiss Seen Around the World", Peter and Brian travel back in time to 1492 to meet Columbus in a scene that parodies the segment “Peabody’s Improbable History” on the popular cartoon show The Rocky and Bullwinkle Show. In this appearance he is voiced by Seth MacFarlane.

A deleted scene intended for "Quagmire's Baby" was recycled into "The History of the World – According to Family Guy" in the Family Guy Volume 9 DVD set of Columbus unhappy that Amerigo Vespucci was getting the continent named after him while he has to settle for Columbus, OH.

Retrieved from "https://familyguy.fandom.com/wiki/Christopher_Columbus?oldid=181859"
Community content is available under CC-BY-SA unless otherwise noted.