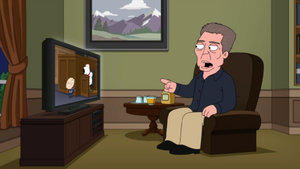 Christopher Walken (born Ronald Walken, March 31, 1943) is an American actor, singer, comedian, director, producer, screenwriter, and dancer, who has appeared in more than 100 films and television programs, including Annie Hall, The Deer Hunter for which he won an Academy Award for Best Supporting Actor, The Dogs of War, The Dead Zone, Batman Returns, Pulp Fiction, Catch Me If You Can, Hairspray and Irreplaceable You.

In an effort to prove that Brian is an idiot in "Movin' Out (Brian's Song)", Stewie mentions Treat Williams and Christopher Walken, both of which prompt responses from Brian who associates the names with treats and walks. This prompts a fourth wall reaction from Christopher who notes that Brian is an dumb.

Retrieved from "https://familyguy.fandom.com/wiki/Christopher_Walken?oldid=222691"
Community content is available under CC-BY-SA unless otherwise noted.