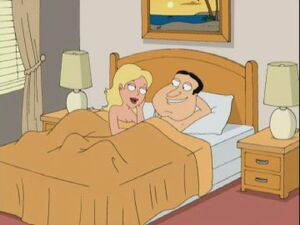 Christy Carlson Romano is an American stage and film actress, author and singer. She is perhaps best known for her roles in the sitcom Even Stevens and the animated series Kim Possible, in which she is the voice of the title character.

She provided the voice of Glenn Quagmire's one night stand in "I Take Thee Quagmire". She has voiced minor characters in other episodes as well.

Retrieved from "https://familyguy.fandom.com/wiki/Christy_Carlson_Romano?oldid=88286"
Community content is available under CC-BY-SA unless otherwise noted.