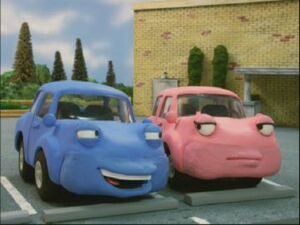 Chuck is a blue car who appears in a car commercial seen in "Deep Throats". In the commercial he flirts with a pink car which he believes is a female. The pink car turned out to be his male friend, Morty, who was painted pink. They are based on characters used in Chevron gasoline commercials of the late 1990s.

Retrieved from "https://familyguy.fandom.com/wiki/Chuck?oldid=177700"
Community content is available under CC-BY-SA unless otherwise noted.