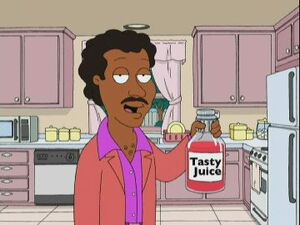 Charles Edward "Chuck" Berry (October 18, 1926 – March 18, 2017) was an American guitarist, singer, and songwriter. Berry was among the first musicians to be inducted into the Rock and Roll Hall of Fame on its opening in 1986.

In "Meet the Quagmires", which parodies the first film in the Back to the Future series, his song "Johnny B. Goode" is replaced with Rick Astley's "Never Gonna Give You Up".

Retrieved from "https://familyguy.fandom.com/wiki/Chuck_Berry?oldid=193552"
Community content is available under CC-BY-SA unless otherwise noted.