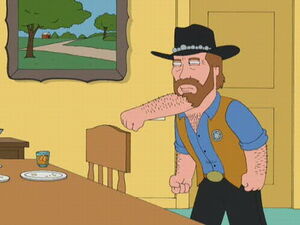 Carlos Ray "Chuck" Norris (born March 10, 1940) is an American martial artist and actor. After serving in the United States Air Force, he began his rise to fame as a martial artist and has since founded his own school, Chun Kuk Do. As a result of his "tough guy" image, an Internet phenomenon began in 2005 known as Chuck Norris facts, ascribing various implausible feats of strength to Norris.

He appeared in "Boys Do Cry", when Peter Griffin tells a joke how he supposedly has no chin, only another fist. Brian calls the rumor ridiculous. As he says this, he gets tapped on the shoulder and, there stands Norris who then punches Brian with his third fist, which comes out of his chin. Later, Lois dresses Stewie as a girl to enter him in a talent contest. He checks out the competition, and finds a girl who would be serious trouble. Stewie calls for him and Norris punches the girl with his third fist.

Norris also makes a brief appearance in "Excellence in Broadcasting" in the musical number, "Republican Town".

Retrieved from "https://familyguy.fandom.com/wiki/Chuck_Norris?oldid=121904"
Community content is available under CC-BY-SA unless otherwise noted.