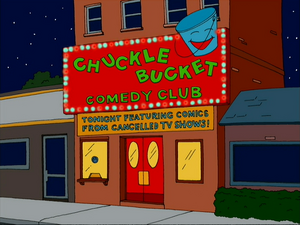 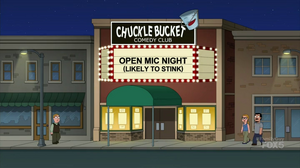 The Chuckle Bucket Comedy Club is where Peter Griffin and his neighbors take in a comedy show in "I Am Peter, Hear Me Roar" after he elects to take a "mystery box" at a time-share presentation and gives up owning a boat and ends up being given tickets for the comedy show. After Peter gets drunk to drown his sorrows for giving away the boat, he insults the comic on stage and proceeds to take up a challenge to perform. As he shoves his open beer into his pants, he appears to have urinated himself to the audience's delight. Thinking they are laughing at his attempts to tell jokes, Peter declares himself a success.

A redesigned Chuckle Bucket appears in "Guy, Robot" where Brian decides to try his hand at comedy. When his political humor bombs, he steals jokes from Stewie's Twitter feed and becomes a success.

Retrieved from "https://familyguy.fandom.com/wiki/Chuckle_Bucket_Comedy_Club?oldid=181224"
Community content is available under CC-BY-SA unless otherwise noted.