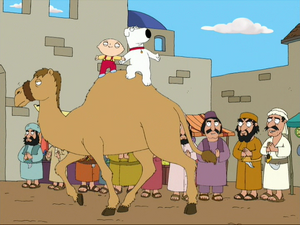 Chucky was the camel Stewie and Brian Griffin stole after singing "You and I are So Awfully Different" in "Road to Europe".

After the camel dies from exhaustion and the night temperature dropping to freezing, Brian proposes they cut Chucky open to crawl inside to survive, Stewie cries that he had named him Chucky and had given him an elaborate backstory. Hardening themselves to the realities of their own situation, Brian cuts open Chucky and Stewie crawls inside only to have Brian notice a nearby Comfort Inn.

Retrieved from "https://familyguy.fandom.com/wiki/Chucky?oldid=198458"
Community content is available under CC-BY-SA unless otherwise noted.