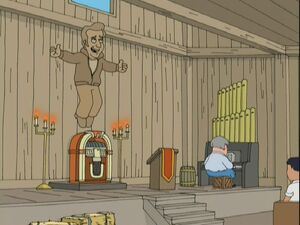 The Church of the Fonz was a religion that was the creation of Peter Griffin in "The Father, the Son, and the Holy Fonz." The church is named after The Fonz, a character from the long-running ABC sitcom Happy Days. The church's holy book is a compilation of episode scripts. The Church was disbanded when its members left to either convert to The Church of George Jefferson at the urging of Sherman Hemsley, The Church of Captain Stubings at the urging of Gavin MacLeod, or back to Christianity at the urging of Kirk Cameron.

Retrieved from "https://familyguy.fandom.com/wiki/Church_of_the_Fonz?oldid=130263"
Community content is available under CC-BY-SA unless otherwise noted.