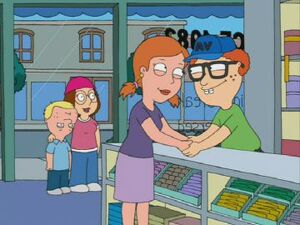 Cicillia was Neil Goldman's girlfriend in "8 Simple Rules for Buying My Teenage Daughter" and for some time afterwards.

After being fed up by Meg Griffin's many rejections, Neil decided to pursue other girls. Neil first revealed to be dating Cicillia when Meg's father Peter and Neil's father Mort first showed Meg the contract. They dated for two weeks before Meg decided she wanted to be Neil's girlfriend until he proved insufferable. During that time, she dated Jake Tucker. When they broke up again, Neil called up Cicillia to get back together with her and go out for another date.

Also in the same episode, Cicillia was one of the girls who was ordered by the gym teacher to get into the shower and bounce around for her.

Retrieved from "https://familyguy.fandom.com/wiki/Cicillia?oldid=194585"
Community content is available under CC-BY-SA unless otherwise noted.