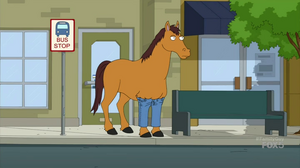 Cinnamon is a horse that Peter tries to use to disguise Joe's handicap when his father Bud Swanson comes to visit in "Papa Has A Rollin' Son".

Peter places a pair of his pants on the horse's front legs and ties Joe's legs behind the horse's neck, with Cinnamon's head inserted up the back of Joe's shirt. To encourage the horse to move, Peter tries to slap it in the privates with a damp towel, but this causes the horse to go berserk and thrash around the hose and Peter tries to put it down with a shotgun. Cinnamon escapes and is seen later by Mayor Adam West who comments on the pants the horse is still wearing.

Retrieved from "https://familyguy.fandom.com/wiki/Cinnamon?oldid=183201"
Community content is available under CC-BY-SA unless otherwise noted.