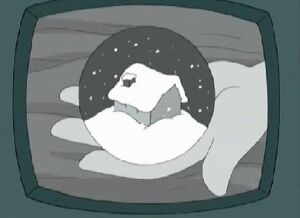 In "Screwed the Pooch", Brian reveals Peter was banned from a video store for taping over the movie and spoiling the ending by saying "It's his sled. It was a sled from when he was a kid. There. I just saved you two long, boobless hours."

When Brian tries to say the film Slice and says it as "sliced" in "Baby Stewie", Stewie accuses him of having a "Citizen Kane" tone of voice.

Retrieved from "https://familyguy.fandom.com/wiki/Citizen_Kane?oldid=220150"
Community content is available under CC-BY-SA unless otherwise noted.