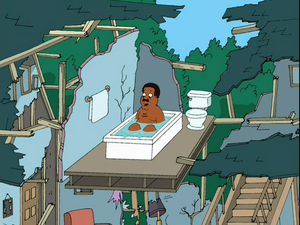 The Bathtub Gags are a series of running gags in Family Guy, in which Cleveland's house is destroyed from the front and the platform keeping his bathtub steady tilts and he slides off. This gag originated in Family Guy and continued in The Cleveland Show.

Usually, upon the object's first impact on the house, Cleveland would shout "What the hell?!". As the bathtub slides out onto the yard, he would scream in disbelief, "No No No No No NOOOOOO!"

In "Hell Comes to Quahog", the gag made its first occurrence. Peter blows up the front of Cleveland's house with a tank he bought at a car dealer and Cleveland plummets onto the lawn. Cleveland then asks Peter to blow the towel rack down.

In "Barely Legal", Cleveland's house is blown open from the front by a giraffe stolen by Peter, fleeing after it is scared by Quagmire. Cleveland, after falling, declares he must stop taking his baths during Peter's shenanigans.

In "Tales of a Third Grade Nothing", Peter puts a huge balloon in his house and inflates it using hot air, and the house collides with Cleveland's and so he falls off again. Cleveland states that he can't feel his legs, and Joe "welcomes" him to the world of paraplegia. Cleveland then says he can feel them again, and Joe moans in disappointment. This is the first time where Cleveland doesn't say "What the hell?!"

The Car Backing Up

In "Family Gay", Peter attempts to back his car out of his driveway to go to the movies with Lois. However, his horse 'Til Death is in the way. In an attempt to back his way through it, he backs the car in full speed. But when the horse moved out of the way, the car ends up slamming into Cleveland's house. Peter drives away before Cleveland falls. 'Til Death walks over and starts drinking the bathwater, so Cleveland comments on how disgusting it is.

In the pilot of The Cleveland Show, Peter attempts to catch the Road Runner a la Wile E. Coyote with a rocket, but of course, it goes into Cleveland's house. After falling, Cleveland finally snaps that he has had enough.

In "Spies Reminiscent of Us", Dan Aykroyd detonates a Russian missile before it enters the Earth's atmosphere. However, the missile's fuselage does not explode, and ends up landing on Cleveland's house in Stoolbend. Tim the Bear passes by and states that he does not understand this gag. This is the first incident in which Peter isn't directly responsible.

In "Brian's Got a Brand New Bag", Peter beats Brian up after watching Road House and throws him out the window onto the road which causes a car to swerve into Cleveland's old house, but the bathtub has no water or anyone in it. After a brief pause, Peter remembers that Cleveland moved.

In "Gone with the Wind" on The Cleveland Show, Loretta Brown dies from falling victim to the gag. She died when Peter swung around a dinosaur skeleton and hit Cleveland's old house. Loretta is in the bathtub; she falls out and dies. Later in the episode it was mentioned that Cleveland fell out of the bathtub "more times than could possibly be funny" and was left without a scratch. In addition, Cleveland drops an Oreo at her tombstone and says, "No no no no no NO!!" the same way he would falling out of the bathtub.

In "Yug Ylimaf", a gag is played in reverse wherein Peter hits Cleveland's house as a human cannonball, attempting to travel to Australia.

In the uncensored version of "Valentine's Day in Quahog", after Meg's kidney is returned to her by Toby, he assures her that he got a replacement. Cleveland wakes up in the same motel to find his kidney taken as the floor collapses and he slides out of the room and into the parking lot. He chuckles that someone will end up getting a black guy's kidney.

In a cutaway gag in "The Simpsons Guy", Cleveland's solo biplane is seen crashing to the ground as a metaphor for the cancellation of his spinoff.

The end theme to "Peter's Def Jam" is replaced by a mix of quotes from the show, including Cleveland's "No-no-no-no-no!".

When Noah/Peter needs wood to build the ark in "Holly Bibble", he borrows some from Cleveland's house, which causes his bathtub to fall out.

A list of bathtub gags appearing on The Cleveland Show

Retrieved from "https://familyguy.fandom.com/wiki/Cleveland%27s_Bathtub_Gag?oldid=230884"
Community content is available under CC-BY-SA unless otherwise noted.