Mike Henry
Arif Zahir
Cleveland Orenthal Brown, Sr. is a supporting character on Family Guy, and central character in the spin-off series, The Cleveland Show, which reduced him to a guest character on Family Guy until he returned. He is the token black guy in the neighborhood and a sort of novelty in Quahog which is exemplified in his trip to Barrington Country Club in "Fore Father". Until "The Cleveland-Loretta Quagmire", he was married to his wife Loretta Brown, but they separated after Loretta had an affair with Glenn Quagmire, although they still have feelings for each other. Together they had a son, Cleveland Brown, Jr., whose personality and energy contrasted greatly with his father while his parents were still together. He also sports a mustache and often offers deep insight that the other characters are unable to see. In the Pilot Pitch, Cleveland wore a teal shirt with a different hairstyle. However, a character with Cleveland's current design also appears. 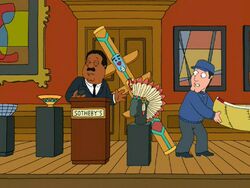 Cleveland was an accomplished minor-league baseball player before moving to Quahog after a break-up with his girlfriend Maxine in "Death Lives". In "Blind Ambition", he also used to be an accomplished auctioneer, but was struck in the head by a totem pole, which resulted in his speech being permanently slowed. In "A Very Special Family Guy Freakin' Christmas", Cleveland is also the president of the Quahog Chamber of Commerce. He was once the proprietor of Cleveland's Deli, until Superstore USA shuts down nearly every store in Quahog in "Hell Comes to Quahog". Following those events, it was re-opened until he moved to Stoolbend when he sold it. After his return to Quahog, he briefly becomes a therapist in "Dr. C & The Women". He becomes a postal worker in "Take a Letter".

Before Loretta, in "Death Lives", Cleveland meets Peter Griffin in the 70's. Cleveland picks up Peter in his van, who asks him to take him back to Rhode Island. Cleveland then mentions something to the effect of being away from "Maxine, the Cheatin' Queen". As Maxine has not been shown on screen, it is largely accepted that Loretta was Cleveland's first wife. For a while following his divorce he dated a woman named Bernice, who had a higher voice than Loretta's, but seemed as equally bossy. Following his divorce, he set out to return to California to become a baseball scout. During what was intended to be a stopover in his old hometown, he was reacquainted with and married his childhood crush Donna Tubbs, and became the stepfather of her children, Rallo and Roberta.

His name is in reference to the professional football team Cleveland Browns.

He "dies" in "Lois Kills Stewie" when he is shot in the chest by Stewie Griffin. But, it was only a simulation, so it never actually occurred.

In "Go, Stewie, Go!", he travels all the way back to Quahog just to see Meg Griffin and new boyfriend Anthony make out.

He often falls out of a bathtub from the second floor of his home to the front porch, usually because of Peter. In "Spies Reminiscent of Us", when the missile was destroyed, the remnants of it crashed into his house while he was bathing. Tim the Bear came and said he didn't get it.

In "Road to the North Pole" he agrees to limit himself to one gift a year after watching a Quahog 5 News broadcast in Stoolbend, as long as it's not a gym membership, or else he'll punch someone in the face.

In "The Big Bang Theory", he appears in a promo for The Cleveland Show.

In the first-ever FOX Animation Domination crossover, Cleveland appears along with Peter at the end of the American Dad! episode "Hurricane!" after a storm goes through the towns of Stoolbend, Quahog and Langley Falls and places the Brown, Griffin and Smith houses in the same neighborhood, where the three fathers of each family; Cleveland, Peter and Stan Smith face each other in a standoff.

In "Back to the Pilot", Brian and Stewie travel into a future where Cleveland has returned to Family Guy. However, when he attempts to leave the Griffin home and return to his, Brian and Stewie discover the Quahog has become a war zone due to their interference with the time stream.

In the uncensored version of "Valentine's Day in Quahog", Cleveland awakes in the motel to find his kidney was taken after Meg's is returned to her. The floor collapses and the tub falls out of the room into the parking lot. He chuckles that someone will get a black guy's kidney.

The Griffins visit the new neighbors, the Smiths in Cleveland's old house in "Bigfat".

Cleveland, along with Donna, are seen at Brian's funeral in "Life of Brian".

Cleveland visits the guys on vacation and joins in Peter's quest to find God in "3 Acts of God".

Peter visits Cleveland in Virginia when he takes a whip from Quagmire's mail in "Herpe, the Love Sore". Joe tries to warn him, but Cleveland can't resist the temptation when Peter announces grape soda.

Peter and the guys prank call Cleveland about Loretta faking her death to fool the IRS when the guys have a slumber party in "Baby Got Black".

In the courtroom scene in "The Simpsons Guy", he is seated next to Carl Carlson. They both assume they are paired with each other because they are the funniest people in their town.

In the short "Mailbox Madness" in "Baby Stewie", Cleveland receives a text that his mother Cookie Brown has died, although this is unclear if it is only a gag in the short.

Arif Zahir took over the role of Cleveland when Mike Henry stepped down following the 19th season beginning with "LASIK Instinct". However, Mike would continue to voice Cleveland in three holdover episodes from the previous season in "Rock Hard", "Must Love Dogs" and "Brief Encounter".

Characters in bold appear on The Cleveland Show only.