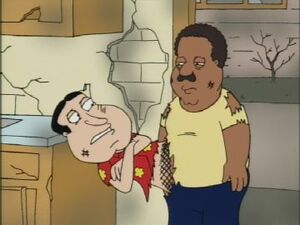 Clevemire is the result of a mutation after the events of Y2K in "Da Boom" that joins Glenn Quagmire's upper body to Cleveland Brown's hips. They both argue about their name after Peter Griffin says hello to them as Clevemire. Quagmire however, thinks they should be called Quagland. They fight and eventually Lois stops them. Unfortunately Cleveland doesn't feel like making love to Loretta because of this.

Retrieved from "https://familyguy.fandom.com/wiki/Clevemire?oldid=160693"
Community content is available under CC-BY-SA unless otherwise noted.