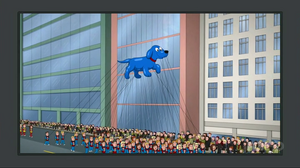 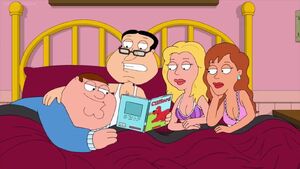 Clifford is parodied as a "Clifton the Small Blue Dog" balloon in the J.C. Penney's Thanksgiving Day Parade in "Turkey Guys".

Stewie tells Brian that Rupert used to call him names in "Dog Bites Bear", including "Clifford the Big Red Sphincter".

When Brian finds out he is being euthanized at the dog pound in "Dead Dog Walking", a hydrophobic Clifford inquires if he also ate a kid.

When Peter is forced to live with Quagmire in "Throw It Away", he insists that the latter read him a Clifford story when he can't sleep.

Retrieved from "https://familyguy.fandom.com/wiki/Clifford_the_Big_Red_Dog?oldid=220444"
Community content is available under CC-BY-SA unless otherwise noted.