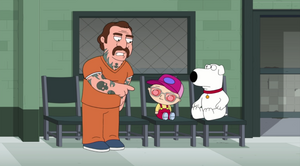 Clint Beltran is one of several prisoners that Stewie has been romantic pen pals with in "Shanksgiving".

While trying to keep a low profile while Lois visits with Peter at the Rhode Island State Prison who decided to get arrested rather than spend Thanksgiving with her family, Stewie tries to stay incognito. However, he is still recognized by Clint Beltran, who reminds him they will be meeting DJ's the next day.

Meeting with a DJ, Stewie insists on something fun and upbeat, including "You Belong To Me" by Taylor Swift. When the DJ suggest "At Last", Stewie's demeanor suggests that he's being unreasonable.

As they celebrate their wedding at a reception held at a Ramada, the DJ still plays "At Last". Stewie speaks sharply, but then softy admits he was right.

Retrieved from "https://familyguy.fandom.com/wiki/Clint_Beltran?oldid=217032"
Community content is available under CC-BY-SA unless otherwise noted.