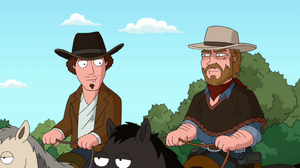 Clint Eastwood (born May 31, 1930) is an American actor, film director, producer and composer. He rose to international fame in Sergio Leone's trilogy of spaghetti Westerns during the 1960s, and as Harry Callahan in the five Dirty Harry films throughout the 1970s and 1980s.

The title and plot elements of "A Fistful of Meg" is inspired by the Eastwood film A Fistful of Dollars.

Clint Eastwood appears in "Herpe, the Love Sore" as Brian and Stewie watch The Outlaw Josey Wales. Stewie sees a blood brother ritual and is inspired to try it with Brian, contracting herpes in the process.

Clint appears as Dirty Harry in "Quagmire's Mom". When he asks a leprechaun if he feels lucky, the leprechaun notes that he has a surprise answer for Harry.

Eastwood is voiced by Seth MacFarlane.

Retrieved from "https://familyguy.fandom.com/wiki/Clint_Eastwood?oldid=175142"
Community content is available under CC-BY-SA unless otherwise noted.