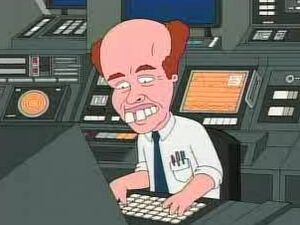 Clinton E. "Clint" Howard (born April 20, 1959) is an American film and television actor. He is a seasoned character actor with numerous brief appearances on television and films, usually noted for his unusual appearance. He has played many bit parts in movies directed by his brother, actor-turned-director, Ron Howard. He is also the uncle of actress, Bryce Dallas Howard.

Since "Spies Reminiscent of Us" is a parody of an '80s movie, it just wouldn't be complete without a guest appearance by him.

Retrieved from "https://familyguy.fandom.com/wiki/Clint_Howard?oldid=121907"
Community content is available under CC-BY-SA unless otherwise noted.