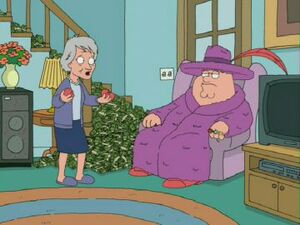 Cloris Leachman (born April 30, 1926) is an American actress of stage, film and television. She has won eight Primetime Emmy Awards and one Daytime Emmy Award. She co-starred in the 1971 film The Last Picture Show for which she won the Academy Award for Best Supporting Actress.

She appeared in "Petarded" when Peter Griffin fantasizes what he would do if awarded a MacArthur Genius Grant; 'buying' Leachman to juggle bean bags. Leachman provided her own voice for the episode.

Retrieved from "https://familyguy.fandom.com/wiki/Cloris_Leachman?oldid=145096"
Community content is available under CC-BY-SA unless otherwise noted.