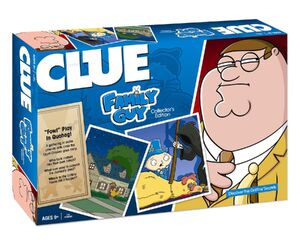 In Family Guy Clue, a dinner party goes awry when somebody kills Ernie the Giant Chicken. Players must take on the roles of the Griffin Family members and figure out who's guilty of "fowl" play. By moving around the board, collecting cards, and spreading rumors, you put yourself one step closer to the killer. But be careful, Joe is ready to make the arrest. Filled with mystery and hilarity, this game is a must-have for Family Guy and Clue fans ages nine and up.

This version provides the same basic rules as the original game, but with all the fun and frolics of Family Guy. From the game pieces to the note pad, Family Guy Clue is designed especially for fans of this hilarious show.

Players will recognize the layout of the Griffin household and chuckle as they see "Look into volcano insurance" jotted on their Clue Sheets. This colorful game is a delightful mix of silly intrigue and the random humor that characterizes Family Guy.

What's in the Box:

Recommended age: 18 months and up

Retrieved from "https://familyguy.fandom.com/wiki/Clue_Family_Guy?oldid=199482"
Community content is available under CC-BY-SA unless otherwise noted.