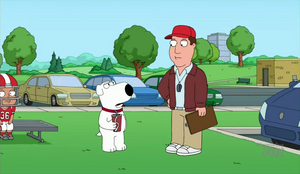 When Stewie is mistaken for a girl, he decides to go out for the 'manly' sport of football, despite being much smaller than the other boys. Brian tries to talk him out of it until taunting by a player's mother convinces him to encourage Stewie. The coach is reluctant to play him at first due to his size, but after insults by Brian, he sends Stewie in where he is promptly knocked cold with a concussion. When Brian's efforts to hide it from Lois are complicated by Chris' own ideas for 'helping.' they take Stewie to the hospital for treatment. While there, they realize they were playing over their abilities, but are encouraged when the coach comes by with kind words about Stewie's gutsy play.

Retrieved from "https://familyguy.fandom.com/wiki/Coach_Herrera?oldid=209240"
Community content is available under CC-BY-SA unless otherwise noted.