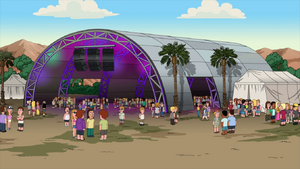 The Coachella Valley Music and Arts Festival (informally known as Coachella) is an annual music and arts festival held at the Empire Polo Club in Indio, California. The event features musical artists from many genres of music, including rock, indie, hip hop, and electronic dance music on several stages that continuously host live music, as well as art installations and sculptures.

Coachella is parodied as "Couchella" in "A Lot Going On Upstairs".

In "Hot Pocket-Dial", Stewie compares the dual appearance of both Neil and Mort Goldman to Coachella.

Hammer takes Peter to Coachella when he adopts the millennial lifestyle in "HTTPete". Peter elects to see Neil Young, whose act consists of sleeping in front of a television.

Retrieved from "https://familyguy.fandom.com/wiki/Coachella_Valley_Music_and_Arts_Festival?oldid=204748"
Community content is available under CC-BY-SA unless otherwise noted.