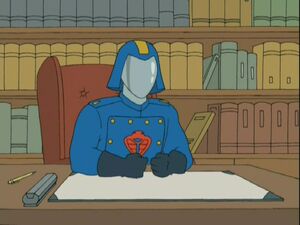 Cobra Commander is a fictional character from the G.I. Joe franchise. He appears in the toyline, animated series, comic books, video games, and movie as the usual principal antagonist. He is the supreme leader of the terrorist organization Cobra, and arch nemesis of the Joes. The character was created by Marvel Comics writer Larry Hama.

In "PTV", he is the Chairman of the FCC Board of Directors. He urges his employees to heavily censor television.

Cobra Commander appears to attack the Joes in a cutaway when Stewie tries to explain the concept of G.I. Joe to a confused Brian in "Amish Guy".

Retrieved from "https://familyguy.fandom.com/wiki/Cobra_Commander?oldid=214737"
Community content is available under CC-BY-SA unless otherwise noted.