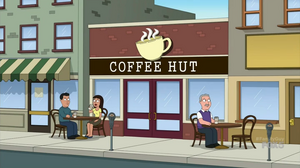 Coffee Hut is the site of a book club meeting that Brian takes Chris to in "Peter, Chris, & Brian".

With Chris already burdened by his dad's worries that they are growing apart from Peter's attempt to makeover him into the success that Peter never became by pairing him with Brian, he suddenly realizes that Brian's comments to his book review for The Shipping News is nonsense made up to make himself look smarter and calls him a fraud.

Gretchen blackmails Peter into a date over coffee in "Take a Letter" when it is discovered that he sent her a letter telling her of his doubts about marrying Lois a week before their wedding. Although he gets her to agree that they can't be together, she talks him into attending a concert with her as a final date.

Several characters converge at the Coffee Hut in "Follow the Money", with Tom Tucker flirting with Jillian Russell-Wilcox who works as the barista. Ernie the Giant Chicken and Lois have coffee together, but when Nicole, Ernie's jealous wife arrives, she gets into a fight with Lois. RJ proposes to his girlfriend Janine, but is turned down when his arm is crushed.

In "Island Adventure", Lois confronts Quagmire over his use of her advice to score with middle-aged women. He apologizes, but then tricks her into helping him pronounce the name of a singer to score with yet another woman.

Retrieved from "https://familyguy.fandom.com/wiki/Coffee_Hut?oldid=211779"
Community content is available under CC-BY-SA unless otherwise noted.