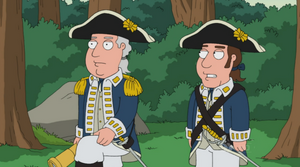 In "Cool Hand Peter", when Peter Griffin and the guys decide their only way out of prison is to make a run for it, Peter acknowledges that sometimes you just have to make a decision to go for it and such commitment is what won the American Revolution. A cutaway gag shows the Colonel surveying British troops across a river as a subordinate notes that the enemy troops on the other side are too well entrenched. When Colonel Goatbanger spots a goat on the other side, he announces that they will proceed with the attack.

Goatbanger is voiced by Seth MacFarlane.

Retrieved from "https://familyguy.fandom.com/wiki/Colonel_Goatbanger?oldid=167721"
Community content is available under CC-BY-SA unless otherwise noted.