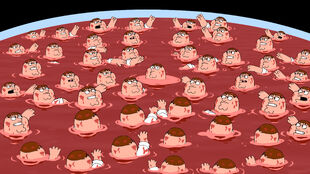 Coma Guy
Peter ends up in a coma. 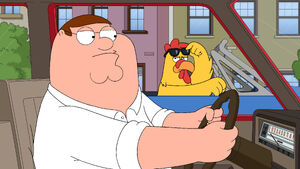 When Peter embarrasses Lois by admitting he has never read a book at a cocktail party she's throwing, she insists that he read something from the library and recommends Orwell's 1984. But when he's accidentally given Van Halen's album 1984, he becomes hooked on the music until Lois gets fed up with it and insists that he take it back. But on the way back to the library, Ernie the Giant Chicken wordlessly challenges him to a drag race where he is distracted by a squirrel and smashes into a tree, falling into a coma. 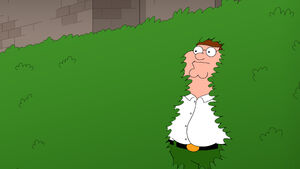 While Peter undergoes a series of dreams and hallucinations, his family and friends gather around him. He goes into cardiac arrest, but the doctors are able to get his heart started again. However, Dr. Hartman brings news that he is brain-dead and gives Lois the option of pulling the plug. Peter dreams of a cruise ship in the Panama Canal with numerous deceased previous characters. They encourage him to board as well, but when he asks for the Wi-Fi password, he discovers there is none and refuses to go, coming out of his coma to find Lois holding the plug to his life support.

Back home, he is understandably upset that she would nearly end his life while she's surprised that he hasn't killed himself in one of his stunts yet. In revenge, he makes a series of unreasonable demands, but when things come to a head, she walks out with the kids intending to leave him. After some time alone Peter realizes he's going to miss his family, and thanks to some fast driving to the sound of Van Halen's "Panama", stops them at the airport where everyone reconciles.

Retrieved from "https://familyguy.fandom.com/wiki/Coma_Guy?oldid=229529"
Community content is available under CC-BY-SA unless otherwise noted.