[For a complete script, see: "Coma Guy" at the Transcripts Wiki]

Cleveland: I only read four books in my life and three of them were about Johnny Bench. 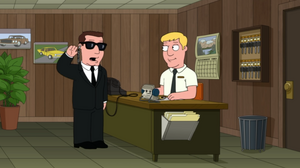 Meg: It's crazy like JFK deciding to cruise through Dallas in a rental.
[Cutaway gag to a secret service agent returning the car to the rental shop]
Car Dealer: How'd that convertible work out for you?
Secret Service: Yeah, I don't...I don't know. Good...Okay.
Car Dealer: And did you get all your stuff out of the car?
Secret Service: ...Kind of?

[Peter's family visit him when he's in a coma]
Dr. Gravitas: It's very important that you speak to Peter. He can hear you. Talk about the good times. What he means to you. Talk and keep talking.
[The family goes silent for a few seconds]
Lois: Let's just turn on the TV.

Peter: The Godfather insists upon itself.

[Peter's friends visit him in the hospital]
Joe: Hey,...if this goes south,...is there a plan for Peter's rakes?...Who's just get Peter's rake?
Chris: What did I tell you, mom? What did I tell you?
Joe: What? I thought it'd just be one less thing to worry about Peter.
Cleveland: You came out of the blocks too soon, Joe.
[Bonnie enters]
Bonnie: Oh, Lois. I came as soon as I heard. So, have you guys made any arrangements, rake wise?
Joe: Bonnie. Ixnay on the Akesray?

[Peter's heart rate starts back up and Dr. Hartman covers his face with the blanket as though he was dead]
Dr. Gravitas: No! That's the good sound!
Dr. Hartman: Oh, why don't you just do everything!? [leaves in a huff] I hate this stupid hospital.

Peter: Wasn't a true story, right?
Jose: What?
Peter: Coco.
Jose: No, it was fictional. Somebody make it up out of their head.

Dr. Hartman: Mrs. Griffin, I have some good news or some bad news, depending on how you feel about your husband.

[Peter is about to board the boat to his death]
Peter: Hey, before I go. What's the boat's wi-fi password?
Jose: Oh, there's no wi-fi on board.
Peter: [horrified] I DON'T WANNA GO!!!

Lois: You know what it's like being married to you!? Every day, wondering if my husband's gunna die from something stupid!? Crashing your Petercopter, getting eaten at the zoo, running into a tunnel that's not really a tunnel but just something the Roadrunner painted on the side of a rock!
Peter: Yeah, well I saw him go through it!

Fly: [singing] And who am I? I'm a fly on the wall. A fly who's seen it all.
[Peter squashes the fly]
Peter: Aw, dammit! Now we gotta repaint!

Meg: Mom, what is it?
Lois: I thought maybe your father would show up at the last second and we'd have one of those airport scenes.
Brian: That's a nice movie trope, Lois, but the post-9/11 reality is, there's no way a non-ticketed civilian can-
[Peter crashes his car through the wall]
Peter: Lois! Kids!
Chris: Dad came! Brian was wrong again!

Peter: If I gotta have my plug pulled by somebody, I want it to be you and you're the only people who's plug I wanna pull.

Chris: Well, we all learned an important lesson. No one should ever read a book.

Chris: Oh my God, you guys! Another space shuttle exploded!
Peter: [sigh] Well, there's only one thing to do. Let's paint.

Fly: [singing] When shuttles blow up, it's not always an accident.
Stewie: What do you mean, not an accident? Who is this guy, singing?
Fly: [singing] And who am I? A conspiracy fly. Did you know NASA means "deceive" in Hebrew?
Peter: I did not.

Retrieved from "https://familyguy.fandom.com/wiki/Coma_Guy/Quotes?oldid=223871"
Community content is available under CC-BY-SA unless otherwise noted.