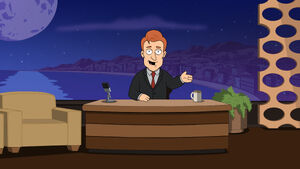 Conan Christopher O'Brien (born April 18, 1963) is an American television host, comedian, writer, producer, and voice actor. He is best known for hosting several late-night talk shows, the most recent of which, Conan, premiered on American cable television station TBS in 2010.

Conan appears as himself in "In Harmony's Way" when Peter Griffin and Quagmire perform as a singing duet on his show Conan. When Peter ruins the act and Quagmire walks out, Peter tries to strike up a conversation with Conan, noting that his make-up lady was crying backstage. Conan snaps at him that Peter is not to talk to him during his time.

Retrieved from "https://familyguy.fandom.com/wiki/Conan_O%27Brien?oldid=211761"
Community content is available under CC-BY-SA unless otherwise noted.