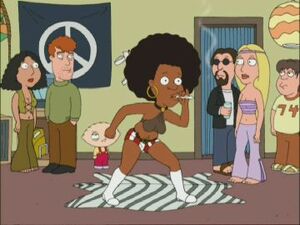 Condoleezza Rice (born November 14, 1954) is an American professor, politician, diplomat and author. She served as the 66th United States Secretary of State, and was the second person to hold that office in the administration of President George W. Bush. Rice was the first African-American woman secretary of state, as well as the second African American, and the second woman. Rice was President Bush's National Security Advisor during his first term.

She appears in the third segment of Stewie Griffin: The Untold Story, titled "Stu & Stewie's Excellent Adventure" when Stewie travels back in time but goes too far. He arrives in the University of Denver in 1974 where a rebellious Condoleezza is smoking a joint and seems to be a big supporter of the Black Panthers. At that, Rice grabs a party-goer and kisses her.

She was voiced by Alex Borstein.

Retrieved from "https://familyguy.fandom.com/wiki/Condoleezza_Rice?oldid=192653"
Community content is available under CC-BY-SA unless otherwise noted.