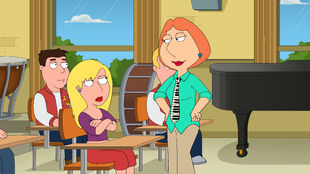 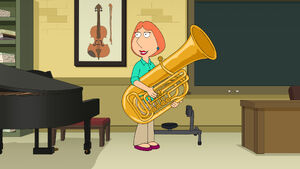 When Chris is unable to play the recorder properly because their teacher quit, Lois gets a job as the music teacher at Chris and Meg's school. But when Connie D'Amico gives her trouble in class, she sends her to the principal's office. This turns out to be Connie's third strike and she is expelled. In revenge, she turns to various bullying tactics, interfering with Lois' life until she publicly threatens her back. But when Connie is reported to have died in an auto accident from cut brake lines, Lois becomes the prime suspect. 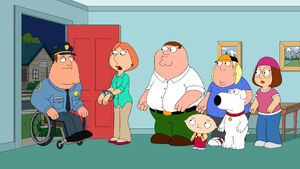 Facing the prospect of having to be responsible for himself, Peter tries to prove her innocence. But after several failed attempts, he returns home to find that Lois has been released and that Connie was found to have faked her own death by placing a blond wig on Peppa Pig prior to the crash.

Later at home, Peter finds himself the victim of the sexual desires of a prison-buffed Lois.