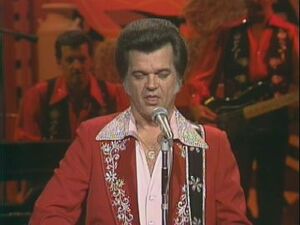 Conway Twitty (September 1, 1933 – June 5, 1993), born Harold Lloyd Jenkins, was an American country music artist. He also had success in early rock and roll, R&B, and pop music. He held the record for the most number one singles of any act with 55 No. 1 Billboard country hits until George Strait broke the record in 2006. From 1971–76, Twitty received a string of Country Music Association awards for duets with Loretta Lynn. A former member of the Grand Ole Opry, he was inducted into both the Country Music and the Rockabilly Halls of Fame.

In "Bill and Peter's Bogus Journey", Twitty appears on two occasions. First, after Bill Clinton and Peter Griffin, both high on marijuana, steal a live pig to satisfy their hunger cravings, the pig farmer introduces footage of Twitty singing "Did You Know Your Love Had Taken Me That High" [1] as a distraction, after a joke in poor taste.

Again as a distraction, Alexander Graham Bell introduces another of his performances with "You've Never Been This Far Before". [2]

He receives subtle references in "Baby Not On Board" when the Griffins sing "The Rose", one of Twitty's number one hits and again in "New Kidney in Town" when President Barack Obama dresses as Conrad Birdie from Bye Bye Birdie. Birdie was intended as a parody of Conway Twitty.

In "Peter's Daughter", at the very conclusion of the show, a distraction is required when Meg is abandoned at the altar by her prospective groom, Michael Milano. Realizing that the church congregation, and the television audience, are there to see a wedding, Peter uses Twitty singing "Hello Darling" [3] to entertain them.

In "The Juice Is Loose", after Lois arrives home to find Stewie on the roof, she yells at Peter, who then feels that he needs a distraction, and introduces Twitty. Twitty performs "I See The Want To In Your Eyes" [4] lengthily. The plan fails, however, as Lois is still mad at Peter the next morning.

An "encore" performance was shown in the advertisements for Family Guy Presents: Seth & Alex's Almost Live Comedy Show, but was not shown in the special.

In "Family Goy", in a cutaway where Quagmire believes he got the spin-off, he starts to mention Conway Twitty as one of the things he'll look forward to not seeing anymore before cutting off his speech when he notices moving trucks at Cleveland's house.

In It's A Trap!, Twitty appears as "Darth Twitty", performing a verse of "Games that Daddies Play". [5] An Imperial helmet is superimposed on his head.

In "Lois Comes Out of Her Shell", Twitty appears as "Conway Bieber" singing "Only Make Believe" [6], wearing a CGI Bieber wig on his head; filling in for Justin Bieber after being beat up by Peter.

God tells Peter that Conway Twitty asks to knock off with the recurring gags involving him in "3 Acts of God".

A teenage Peter Griffin starts to play "Only Make Believe" for his adult self in a video in "Peter, Chris, & Brian", until adult Peter cuts it off, calling it annoying.

As Peter is dying in the future of "Rich Old Stewie", he sees others who have already passed on from the show, including Conway Twitty whom he claims is pissed, but chuckles because he is wearing the Darth Vader helmet from "It's A Trap!" and claims he was cool with the gags.

Meg has a flashback of Peter seguing to Conway Twitty in "The Juice Is Loose" in "Better Off Meg".