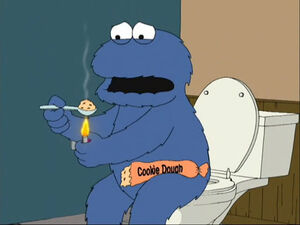 Cookie Monster is a muppet on the beloved children's show, Sesame Street. Covered with blue fur and possessing a pair of googly eyes, Cookie Monster has an insatiable appetite. As his name implies, his primary craving is cookies, but he can and often does consume anything and everything.

Cookie Monster entered rehab in "Model Misbehavior" due to his cookie addiction. After being injected with anesthesia several times, he was soon released. He went back on his cookie binge, being caught by Lois Griffin free-basing in a women's restroom. He tries to make a cookie by burning cookie dough on a spoon, which is similar to the way heroin is prepared.

Stewie ponders if Brian changing the past may have resulted in Cookie Monster inventing Cookiebook instead of Facebook in "Back to the Pilot".

He appears in "Baking Bad" as the bank manager who immediately approves of the loan for Peter and Lois' cookie store, Peter's Wife's Cookies. When the shop is closed, Cookie Monster happily takes back the loan in exchange for the store.

Sesame Street‘s move to HBO is marked with more adult content in "The Peter Principal", with Cookie Monster munching on Big Bird's ass instead of cookies.

In "The Woof of Wall Street", Cookie Monster, Elmo and Herry Monster take offense at Brian being called a monster for investing in a company that makes protein shakes from dogs. When Elmo points out that some monsters are nice, Brian retorts with his voice actor's sexual abuse accusation, which Elmo responds by noting that the accuser recanted the charge. When Stewie notes that a second case expired due to the statute of limitations, Elmo refuses to comment. After an uncomfortable pause, Cookie Monster shouts "cookie!" which elicits joy from Brian and Stewie.

After Peter learns that an employee has to be fired from the brewery due to budget cuts in "Yacht Rocky", he stumbles over his boss' name by referring to him as Ernie and Cookie Monster before correctly identifying him as Bert.