[For the complete script, see: "Cool Hand Peter" at the Transcripts Wiki] 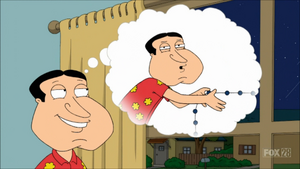 Peter: Okay, alright, I got one! Would you rather be a hobo with a 5% chance of gettin' inherited by a rich guy, or be Hitler two years before the end of World War II? 'Cuz you know you gonna have to shoot yourself but you still got two more years as Hitler.
Joe: If you're the hobo, do you, uh, have a place to sleep like an underpass, or...
Peter: Different every night.
Quagmire: As Hitler, can I change certain policies so that maybe I'm looked on more favorably at the end of the war?
Peter: You already screwed up big time. Lotta dead Jews.
Cleveland: Am I a Blue State or a Red State hobo?
Peter: Blue but midwestern blue.
[Cleveland, Quagmire, and Joe mumble in thought]
Joe: It's cold out there.
Quagmire: Am I allowed to alter the mustache?
Joe: Dude, why do you keep trying to make Hitler work?
Cleveland: Am I allowed to kill other hobos to increase my odds?
Peter: Kill anyone you like, you're a hobo.
Joe: Am I a walking hobo?
Peter: No, Quagmire and Cleveland are, but you're not.
Joe: So, wait, I would also be a paralyzed Hitler?
Peter: Yeah.
Cleveland: Would I be a black Hitler?
Peter: YYYYYes, no.
Joe: Oh, well, wait a minute! How come I gotta be crippled Hitler and he's still white Hitler?!
Peter: You got such a problem with it, Joe, just be the hobo!
Quagmire: This one isn't very fun.

[Peter and the gang get pulled over by a police car]
Peter: Don't worry about it, guys, I read nowhere that southern sheriffs really wanna be talked down to by big-shot northerners.
[Peter puts on a Harvard University sweater and takes out a pipe as the sheriff approaches the car]
Sheriff Nichols: Afternoon.
Peter: [in a snooty voice] Officer, hwhat is it? We are in a tremendous urban rush.
Sheriff Nichols: You fellas ain't from around here, are yeh?
Peter: Hey, Sheriff, I'm tryin' to learn southern. Is this sayin' anything? Adoi-doi-doi-doi-doi!!

[drops a bag of weed in the trunk of the car]
Sheriff Nichols: Well, lookee here. What have we got in this thing?
Cleveland: Oh, come on! You planted that there!!
Peter: We had drugs?!! Oh, my God, why am I drivin' drunk when I could've been drivin' high?!

Quagmire: Oh, God, so hot out here!
Peter: Yeah, you know it was gonna be hot when you heard that lonesome slide guitar and that hawk's cry.

[On the what was supposed to be the last night of the boys' sentence]
Warden: Says here, you got another thirty days on your sentence.
Peter: WHAT?! But the court said we're supposed to go home tommarow!
Warden: Well the court ain't here. Is it?
Peter: Aw man, how the hell are we gonna do this for another 30 days?
Black Prisoner: That's the way that goes around here. Once you come in, you're never allowed to leave. I got my sentence extended 30 days once, that was 45 years ago.
Quagmire: Oh, my God! You hear that? We're gonna be stuck in here forever!
Joe: Oh, God, what are we gonna do?
Peter: Well I know what I'm gonna do, if we're gonna be here a while, I'm gonna find the biggest guy in here and kick hiss ass! Oh, wait that's me.

[all three of the wives are drunk]
Lois: He-he-e-ey! I got an idea for somethin' that's gonna be so fuckin' funny! [whispers to Donna and Bonnie] Okay, Bonnie, go get it, it's in the closet. [Bonnie leaves] Brian! Brian, come out here! Whatta ya doin'? [Brian exits kitchen reading a book]
Brian: I'm reading.
Lois: What... [giggles] What... What...Whatta you readin'?
Brian: Well, I was just finishing Jonathan Franzen's book. Y'know, I'll admit, it has its moments, but it's completely overrated. I mean, I'm not saying I wrote something similar to it several years ago, but I am saying...
Lois: Grab him! [Bonnie, Lois and Donna pounce Brian]
Brian: What? Hey! Hey...hey! What are you doin'?! Hey!
Lois: Get his paw! Hold still!
Brian: Hey hey hey! What...?
Lois: Push him down onto all fours!
Brian: No! What are you do...?! I don't wanna do this!
Lois: If he really starts freakin' out, put your pinkie in his butt!
[the wives get off Brian revealing he's in a ridiculous bumblebee costume, which he attempts to take off]
Donna: Calm down! Calm down! [she hits Brian with the Franzen book, he bumps into the stereo, the ladies laugh]
Lois: Now Stewie!
Stewie: [takes out a revolver] Alright, I guess this is the night bitches die.

Peter: I hope we pass a McDaniels or a Burger Queen.
Quagmire: Oh, that's right, we're on television.
Joe: I could really go for a flame-broiled Bopper!
Quagmire: This is so frustrating. We all know what we're talking about.

Joe: I put in a call from the McDaniel's payphone while you guys were getting that nine-piece Chicken McFingers and those Diet Conks and those Fresh Fries.
Quagmire: Oh, come on! They don't own French Fries!

Joe: You took an oath just the same as me, Sheriff. To protect and serve. Not to harass and douche. Just ‘cause you have a badge doesn’t mean you can treat people anyway you like. And as a law enforcement professional, you have an obligation to be more ethically upstanding than the average man, not less. Now, get the hell outta my town!

Joe: It's great being back in the North, where people are civilized.
Mayor West: Hey, what, are you guys all on a date? GAAAY!!

Retrieved from "https://familyguy.fandom.com/wiki/Cool_Hand_Peter/Quotes?oldid=223287"
Community content is available under CC-BY-SA unless otherwise noted.