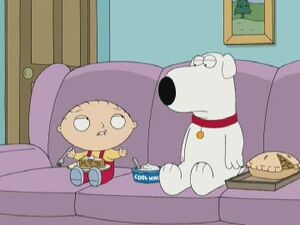 Cool Whip is a brand of imitation whipped cream named a whipped topping by its manufacturer. It is used in North America as a dessert topping and in some no-bake pie recipes.

It is the origin of a running gag involving Stewie Griffin deliberately pronouncing words in a weird way, such as putting emphasis on the "h" in "wh-" words.[1] Though sometimes, other characters would do this. The usual victim of this annoyance is Brian Griffin.

In "Barely Legal", Stewie notices that Brian is having some pie, and then asks for some "Cool hWhip," putting emphasis on the "h" much to the annoyance of Brian. Although he says, "Cool hWhip," just to further annoy Brian, when Brian asks him to say "whip" by itself, he pronounces it correctly. This argument goes on until Brian reveals that the pie he's eating has hair in it.

In the same episode, Meg has Brian tied to a chair, and then says, "We're gonna be here for a hwhile," pretending not to notice it, which Brian argues with her until she says, "Brian you're acting hweird." This further annoys Brian because there's no "h" in it. At the end of the episode, Quagmire goes to a room with two S&M prostitutes, one of whom asks, "Did you bring the hwhip?" Quagmire only says, "What?"

In "Love, Blactually", the Griffins hold a costume party, but Stewie is angry because Brian dressed up as Snoopy just like him and then says, "This evening is ru-eened!" Once again, Brian gets really annoyed to the point that he walks off from the conversation and then walks back into it. Once again, when Brian asks what Stewie calls the remains of ancient Greek structures, Stewie pronounces "Ruins" correctly. To end the conversation, Brian calls Stewie a dumbass, to which Stewie replies, "Oh, Brian, don't be cru-el."

In "The Man with Two Brians", Stewie sees that New Brian is having some pie and suggests, once again, having some "Cool hWhip" with it. However, this backfires on New Brian because New Brian accepts this pronunciation. As the joke is on Stewie, he claims New Brian to be a "bigger buzzkill than Buzz Killington" who shows up on cue to give Stewie another unfunny anecdote. Stewie later tries to persuade Brian, living with Quagmire at the time, to come back home by offering to have some pie with "Cool hWhip", which once again pisses Brian off.

In "Not All Dogs Go To Heaven", Stewie teleports the cast of Star Trek: The Next Generation. Patrick Stewart briefly insults one co-star and Stewie tells Stewart not to say that to "hWil hWeaton," which annoys Stewart. Once again, to further piss Stewart off, when he asks Stewie to say "wheat", Stewie pronounces it correctly. After this banter, Stewie asks Stewart if he ever hooked up with "hWhoopi Goldberg" on set. Stewart replies that they did all the time.

In an advertisement which debuted in January, 2012 for the Nabisco snack of the same name, Brian and Stewie do a routine similar to the first one, where he asks for some "hWheat Thins". Once again, Stewie proves he can say "Wheat" by itself correctly just to annoy Brian. At the end of the ad, Peter, who is off-screen, asks if he can be in the commercial, but gets turned down by both Brian and Stewie.[2]

When the British horse version of Brian says "whim" in the British Griffins segment of "Family Guy Viewer Mail No. 2", British Stewie calls attention to his pronunciation.

When Peter discovers a whip in Quagmire's mail and decides to play with it in "Herpe, the Love Sore", Stewie compliments him on the "Cool hWhip" and Peter turns the whip on him as Stewie questions how Peter can suddenly understand him.

After Brian has been rendered completely docile by obedience school in "Once Bitten", Stewie's use of "hWhip" goes by without a response from Brian.

Pap Finn (Stewie) tells Huckleberry (Peter) that he is going to "hwip" him in "High School English".

The family drinks hot chocolate in "Griffin Winter Games", and burns their mouths, because it's too hot. Stewie is the only one, who doesn't burn his mouth, because he was protected by his drink's "hWhipped cream".

Stewie fails to get a response out of Brian when he deliberately mispronounces 'whirlpool' in "Island Adventure".

Retrieved from "https://familyguy.fandom.com/wiki/Cool_Whip?oldid=217378"
Community content is available under CC-BY-SA unless otherwise noted.