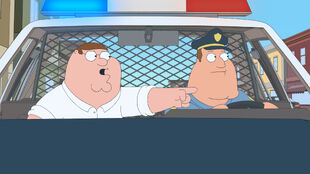 Cop and a Half-Wit
Peter assists Joe in law enforcement. 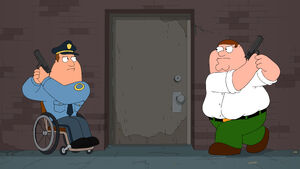 The guys find out that Joe has been reduced to taking care of a gerbil on the police force. When Peter has car trouble and gets a ride from Joe, a call comes in about drug activity and he convinces Joe to proceed to the scene. While Joe is content to wait for backup, Peter charges in with a "borrowed" gun and catches the crooks red-handed. When he is called into his superior's office, Joe expects the worst but finds he is congratulated for cracking the case.

He teams up with Peter and they wipe the streets clean, but when Peter sees Joe lauded as a hero without giving him any credit, he blackmails Joe to keep his silence. When Joe can't take it any more, he decides to come clean, but they find out about a robbery at the Quahog Mini-Mart and decide to stop one last crime together. Peter suffers from eye irritation due to rubbing Vicks on his crotch and getting some in his eyes in order to get fired up. When he bursts in firing blindly from the irritation, Carl pepper sprays him, irritating his eyes even further and they are both held captive by the robbers. Joe sees this from outside, and tries to call for backup. Giving up, he catches them off-guard and takes them down, regaining his confidence in being a good cop and not just an errand boy. 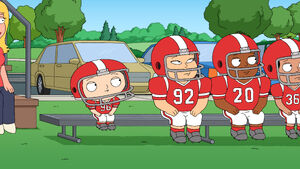 Meanwhile, Stewie is mistaken by a woman at the grocery store for a little girl so he decides to go out for football. Brian tries to talk him out of it due to being significantly smaller than the other players until taunting by a player's mother convinces him to encourage Stewie. The coach is reluctant to play him at first, and when he does get into the game, he is knocked cold with a concussion. When Brian's efforts to hide it from Lois are complicated by Chris' own ideas for 'helping', they take Stewie to the hospital for treatment. While there, they realize they were playing over their abilities, but are encouraged when the coach comes by with kind words about Stewie's gutsy play. When Chris tries to launch a speech about brain injuries in football, he is drowned out by a promotional plug by the NFL.

Previous Episode /// Cop and a Half-Wit \\\ Next Episode

Retrieved from "https://familyguy.fandom.com/wiki/Cop_and_a_Half-Wit?oldid=217351"
Community content is available under CC-BY-SA unless otherwise noted.