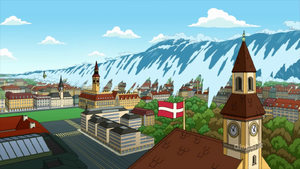 Copenhagen is the capital of Denmark and its most populous city, with an urban population of 1,213,822 as of 1 January 2012 and a metropolitan population of 1,931,467 as of 1 January 2012. With the completion of the transnational Øresund Bridge in 2000, Copenhagen has become the center of the increasingly integrating Øresund Region. Within this region, Copenhagen and the Swedish city of Malmö are growing into a combined metropolitan area. Copenhagen is situated on the islands of Zealand and Amager.

In "Mr. and Mrs. Stewie", Stewie and Penelope play a variation of "truth or dare", drawing locations, disasters and themes to wreak havoc. Stewie draws Copenhagen by tidal wave with the theme of "The Roaring 20's" and successfully involves flappers on surfboards doing The Charleston along with the tidal wave.

Retrieved from "https://familyguy.fandom.com/wiki/Copenhagen?oldid=205672"
Community content is available under CC-BY-SA unless otherwise noted.