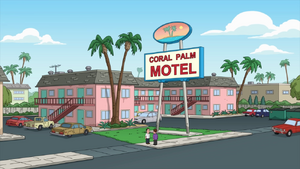 Stewie and Brian search for Mort after it is broadcast that he skipped out on a meeting with the police and learning there is a $10,000 reward for his involvement in a drug scam. They hack his computer and trace his location to Florida, unaware that two shady characters are following them. Through Pitbull, they track Mort's motel down and take him into custody as he worries about being caught by the mob.

Retrieved from "https://familyguy.fandom.com/wiki/Coral_Palm_Motel?oldid=204859"
Community content is available under CC-BY-SA unless otherwise noted.