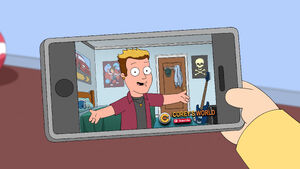 Corey is the host of a YouTube instructional video that Stewie looks up when he needs to get Brian out of a rat hole after shrinking him in "Big Trouble in Little Quahog".

Corey starts the video by pitching his channel Corey's World and his other instructional videos such as how to play the guitar. Stewie calls out to Brian that he will be a while due to watching the other video.

In "Con Heiress", Corey's World has a video to start a lawnmower. However, Chris reports that it is believed that Corey was recruited by Isis to make videos for them.

Corey is a special guest at the Quahog Streaming Con in "Girl, Internetted", where he notes that guests will see that he's only 5'2". He was apparently in trouble after saying 'Nazi stuff' after a competitive Halo game, although he later makes several derogatory comments about Jews. Peter challenges Corey to make Meg an internet celebrity, which results in her starting her own online show in which she would eat anything she could find.

Corey is voiced by Damien Fahey.

Retrieved from "https://familyguy.fandom.com/wiki/Corey?oldid=214958"
Community content is available under CC-BY-SA unless otherwise noted.