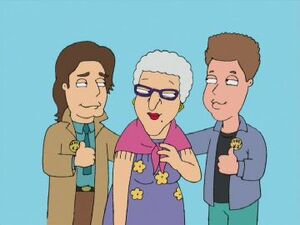 Corey Scott Feldman (born July 16, 1971) is an American film and television actor. He became known during the 1980s, with roles in the Hollywood films The Goonies, The Lost Boys and Stand by Me. In 1987, Feldman appeared with Corey Haim in The Lost Boys. This film marked the first on-screen pairing of Feldman and Haim, who became known as "The Two Coreys". The pair went on to star in a string of films including License to Drive (1988) and Dream a Little Dream (1989).

He appeared with Haim in the "You've Got a Lot to See" from "Brian Wallows and Peter's Swallows" when Brian Griffin hypothesizes they could be running mates if they ran for President and Vice President in 2004.

In the first "Three Kings" segment, parodying Stand by Me, his role as Teddy Duchamp is fulfilled by Joe Swanson, and appropriately renamed Joey Duchamp.

Retrieved from "https://familyguy.fandom.com/wiki/Corey_Feldman?oldid=146309"
Community content is available under CC-BY-SA unless otherwise noted.